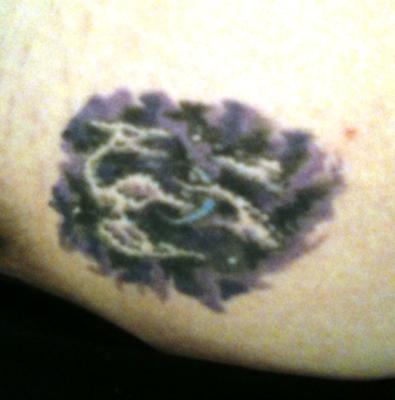 I have a tattoo on my right hip of a cloud shaped like a dragon, and a blue crescent moon. I got it to symbolize a man I once loved with all my heart. Little did I know that it would continue to symbolize him even after he tore my world apart.

When I first designed the tattoo (yes, I designed it myself), I decided to shape the cloud like a dragon because he loved dragons, and I had long used them to symbolize him in other ways, such as a dragon charm on my bracelet.

I chose to use the cloud because he was mysterious and "stormy." The blue moon is shaped like a "C," which is the first letter of his name, and because he was the moon in my world.

Years later, after being cheated on and used for too long, I left him...or had him leave...not that we were "technically" together, anyway, but he lived with me.

At first I thought I would regret the tattoo, but I never have. For one, it is something I designed myself, and I am proud of it. For another thing, it has now taken on a new meaning.

The dragon-shaped cloud reminds me that nothing is ever as it seems. Sure, that cloud looks like a strong, wild dragon, but it will disappear with the next rain, much like him and his love. And the moon, well, he was there for me once in a blue moon, and so that blue moon reminds me to only ever count on myself.

I am now happily married to a man I have known for almost 15 years. I plan to get a tattoo on the other hip to symbolize him, as he helped me to get over my ex.

However, I am going to keep this in mind and make sure that it is something that I can always feel proud of, even if pigs fly and we fall out of love.

Hm...perhaps a flying pig would be a good idea...it would remind me that true love is something that is magical and fantastical...but also that pigs can fly sometimes, and what seems unfathomable can sometimes become reality.

Join in and write your own page! It's easy to do. How? Simply click here to return to Relationship Tattoos.